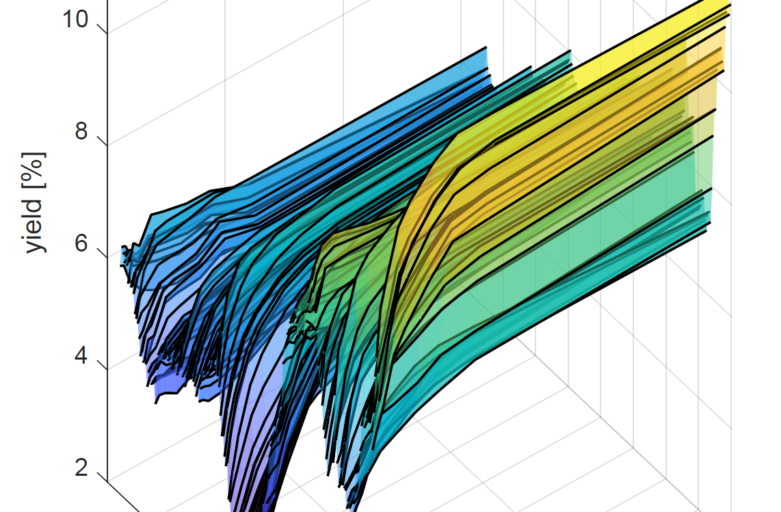 Nontechnical summary:
In my first solo-author publication I analysed the dependence of the US Treasury yield curve on macroeconomic variables using the non-parametric toolbox I developed in my core PhD research (Rubin and Panaretos, 2020a, 2020b). This case study confirms the previous findings under parametric assumptions and thus providing with additional arguments in favour of the standard econometric tools such as Nelson-Siegel parametric family.

Detailed description:
The yield curve is a collection of interest rates index by their maturity that evolve in time. Traditionally, it is visualised as a surface plot where the x-, y-, and z-axes denote the maturity of the bond contract, the month when the contract is traded, and the magnitude of the interest. Figure bellow visualises the US Treasury yield curve data I analysed in my paper, with available maturities: 1, 6 months; 1, 2, 3, 5, 7, 10, 30 years.

I wanted to descriptively analyse the interaction of the US Treasury yield curve and the US macroeconomy represented by three time series visualised in the figure below: industrial production index, annual inflation, federal funds rate (interest rate used by banks and other subjects for overnight deposits at the US Federal Reserve).

In order to analyse the dependence of the US yield curve on the macroeconomic variables I opted for the nonparametric model of sparsely observed functional time series (Rubin and Panaretos, 2020) and assumed the functional lagged regression model (Rubin and Panaretos, 2019). The non-parametric toolbox I developed in my core research papers enables to approach the data without assuming modeling assumptions, thus providing with more sound interpretation of the dynamics. The figure below displays the estimated regression filters.

The interpretation of the estimated filter coefficients (in the figure above) is the following:

These conclusions reflect the same findings as Diebold et al. (2006) who studied the macroeconomic interactions with the yield curve using a parametric model, modelling the yield curve using the Nelson-Siegel parametric family (Nelson and Siegel, 1987) and assuming a vector autoregressive model of the temporal yield curve evolution on the factors level. Therefore my analysis confirms the general applicability of the aforementioned classical econometric tools.

Abstract:
Viewing a yield curve as a sparse collection of measurements on a latent continuous random function allows us to model it statistically as a sparsely observed functional time series. Doing so, we use the state-of-the-art methods in non-parametric statistical inference for sparsely observed functional time series to analyse the lagged regression dependence of the US Treasury yield curve on US macroeconomic variables. Our non-parametric analysis confirms previous findings established under parametric assumptions, namely a strong impact of the federal funds rate on the short end of the yield curve and a moderate effect of the annual inflation on the longer end of the yield curve.