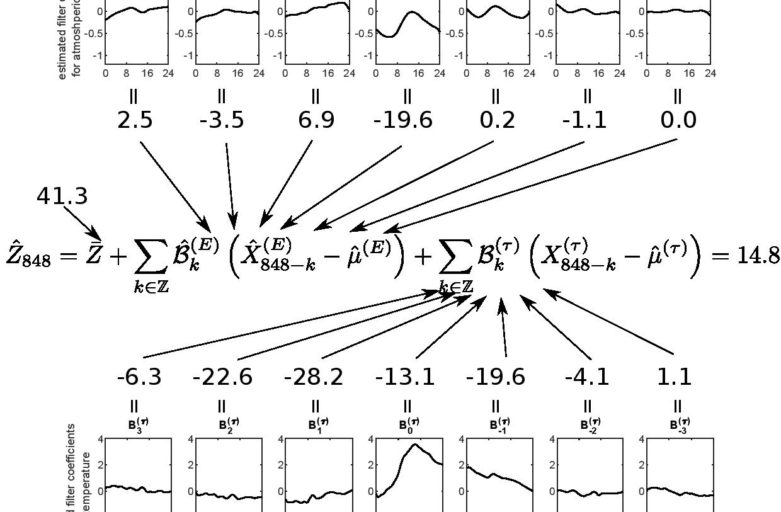 Nontechnical summary:
This paper extends the method I developed in my core paper on Sparsely observed functional time series (refer there for explanation of what such data set is) by adding up the regression model: a sparsely observed time series of curves can predict another. This regression link is assumed to be quite flexible, the regressor’s influence can be arbitrarily lagged.

As a proof-of-concept demonstration I analysed the visibility data (how many kilometres can one see) at the Wank mountain, Germany, and how it can be predicted by the fair-weather electricity and temperature. The schema bellow visualises the prediction of the visibility on day 848 using the fair-weather electricity (top half of the figure) and the temperature (bottom half).

What are the implication of this paper?
My paper solves the regression problem for the non-parametric functional time series data. The paper is theoretical and while the provided meteorological analysis is rather a proof-of-concept, I have successfully applied the method for yield curve modelling (Rubin, 2020).

Abstract:
A functional (lagged) time series regression model involves the regression of scalar response time series on a time series of regressors that consists of a sequence of random functions. In practice, the underlying regressor curve time series are not always directly accessible, but are latent processes observed (sampled) only at discrete measurement locations. In this paper, we consider the so-called sparse observation scenario where only a relatively small number of measurement locations have been observed, possibly different for each curve. The measurements can be further contaminated by additive measurement error. A spectral approach to the estimation of the model dynamics is considered. The spectral density of the regressor time series and the cross-spectral density between the regressors and response time series are estimated by kernel smoothing methods from the sparse observations. The impulse response regression coefficients of the lagged regression model are then estimated by means of ridge regression (Tikhonov regularisation) or PCA regression (spectral truncation). The latent functional time series are then recovered by means of prediction, conditioning on all the observed observed data. The performance and implementation of our methods are illustrated by means of a simulation study and the analysis of meteorological data.